The first edition of the MOOC “Open eTwinning” took place from May 18th to June 29th, with an enrolment of over 1,500 participants. For the first time in a MOOC INTEF, the total number of enrolments from other countries was higher than the number of registrations from Spain. This was actually to be expected since this MOOC was our first-ever conducted in English, particularly aimed at all countries of the European Union that participate in the eTwinning programme.

Due to these features, the MOOC sparked interest in almost every continent, as seen in the graph below, which shows the geographical distribution of participants. The biggest number of participants, after Spain, comes from Italy, Greece, Portugal and Serbia.

Given the nature of eTwinnnig, it was to be expected that the majority of the participants would be teachers, which the final results have confirmed. It should be noted that among the teachers enrolled in the MOOC there were representatives of both state and private schools. There was an almost equal interest among Primary and Secondary Teachers, though there were not as many representatives of Vocational Training.

Out of a total of 224 participants that started the MOOC (according to the number of digital portfolios that were registered on the platform) 120 completed it in the alloted timeframe. It should be noted, though, that some of the participants did not record their portfolio on the platform but published it through different social networks.

Activity on Twitter was based on the use of a main hashtag (#twinmooc), along with other specific hashtags created for some of the activities and events that were developed along the MOOC, e.g. #etwinquest. 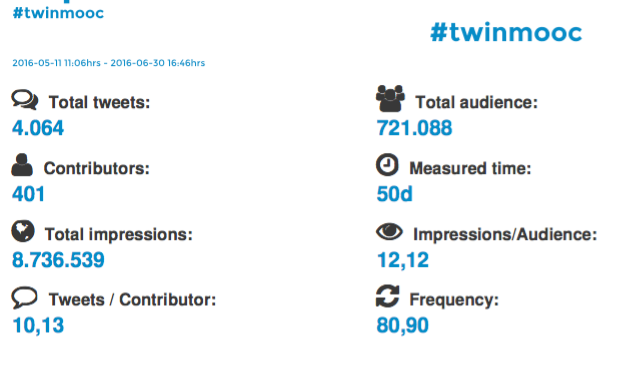 This overview gives us an idea of the scope of this hashtag in the first English edition of this MOOC. Both the total tweets and the estimated audience that were able to get the information, give us some pretty high numbers compared with the previous editions of the MOOC in Spanish.

The number of tweets (more than 4,000 in total) remained above 100 a day for almost the entire duration of the course and their estimated scope between two and three hundred thousand. The most significant peak is found in the dates nearby June 9th, when a live event took place with the representatives of the National Support Services in several European countries. 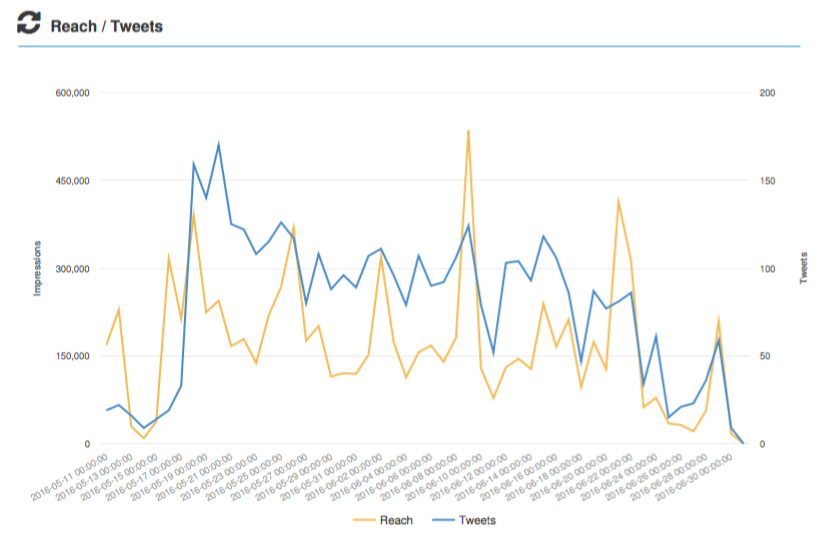 Given the European dimension of the MOOC, many of the participants came from all over Europe, most particularly from Spain, Italy, Greece, Portugal and Serbia. There were also many other participants from other geographical locations, especially from different parts in America, as shown in the concentration maps below. 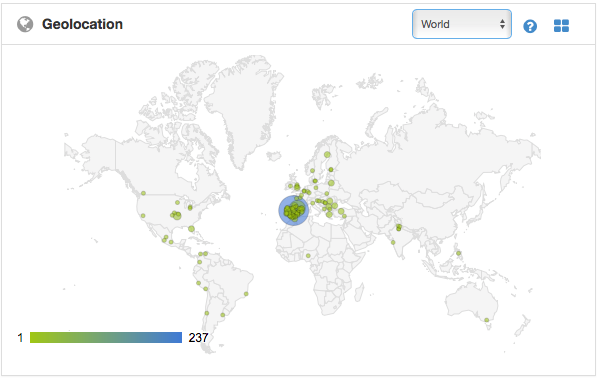 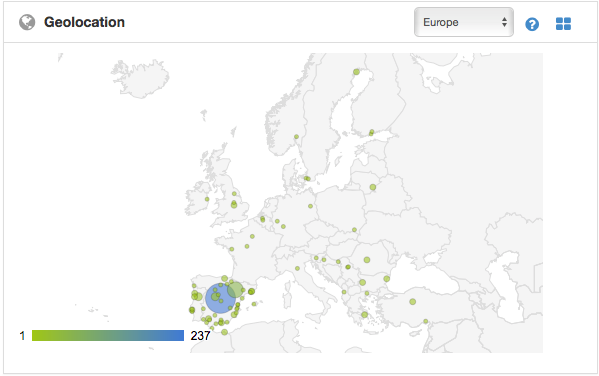 In this area, we can see how the team members in charge of interaction and facilitation are among the most active participants while there are institutions (eTwinning, INTEF) which stand out as the most influential contributors, mainly due to the number of followers they have. 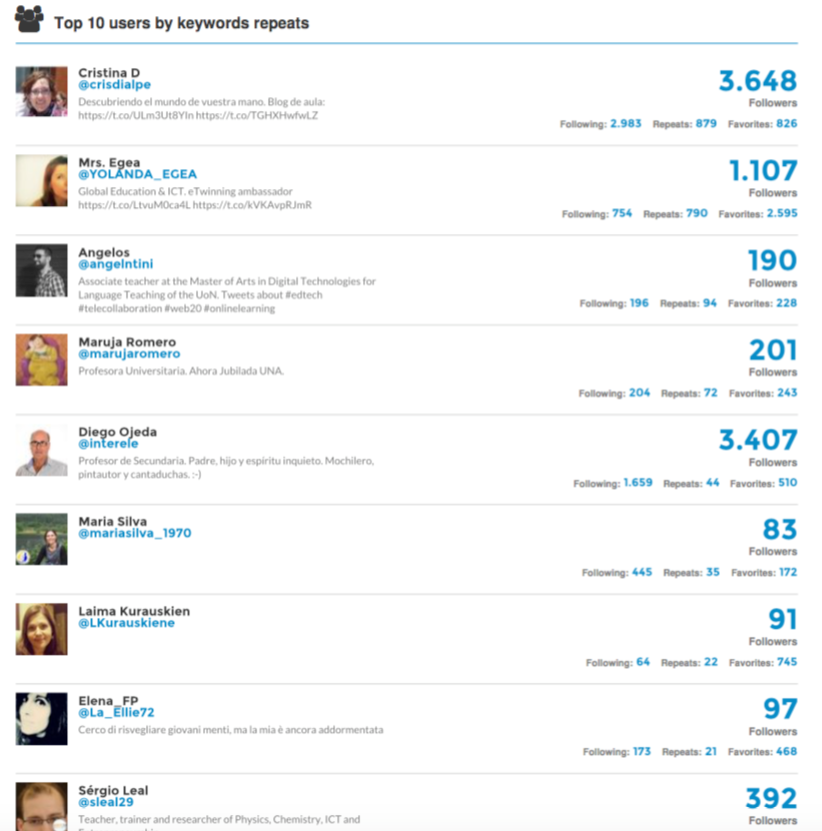 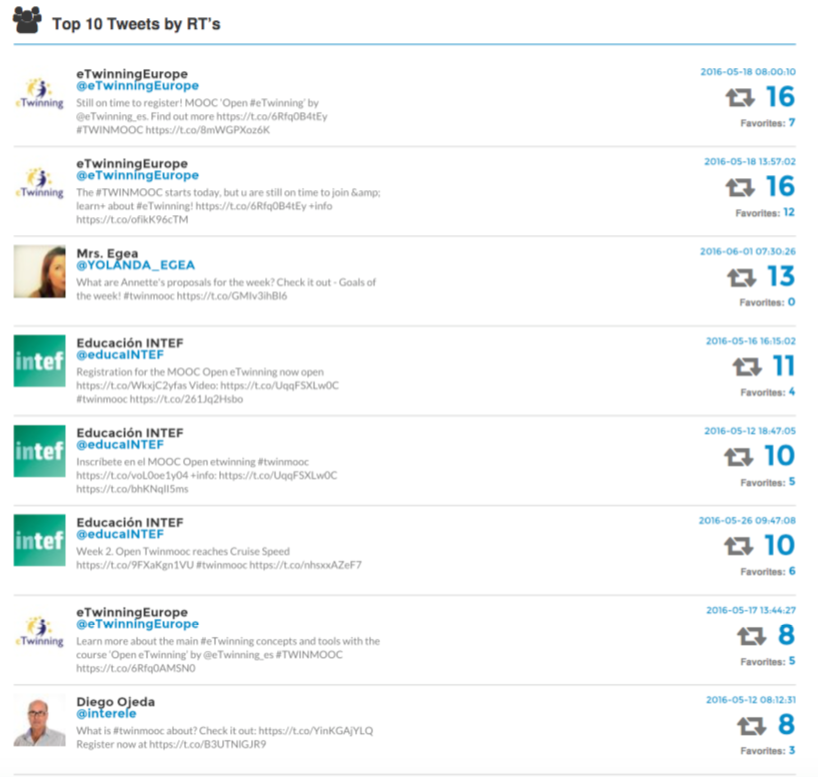 The analysis of the most used terms reflects a clear role for the term “eTwinning”, both with and without the hashtag, which has shown continuous growth throughout the course. Second is the word “project”, which makes us think that the importance of using these two terms together has been understood.

The word cloud below shows some of the most commonly used terms for these interventions through social networks. 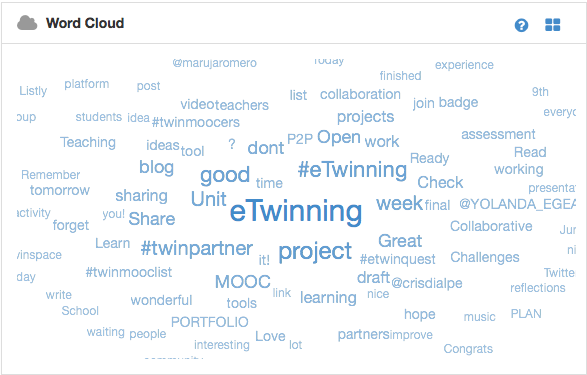 The MOOC’s group in Facebook has 592 members and, in general, has been very active. Regarding the content of the messages, as shown in the graph below, a large majority (about 70%) contains a link, followed by plain text messages (14%) and those containing and image (20%). 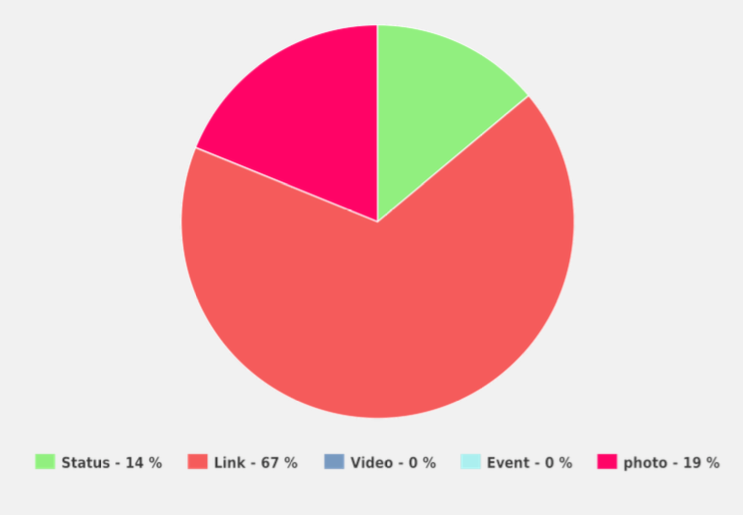 On June 9th, a live event was held with the title “And now what?” with the participation of National Support Services from different countries (Spain, Greece, Italy, Serbia and Portugal). It lasted slightly over an hour and had the intervention of 5 speakers, who interacted with the participants through social networks, responding to the questions raised and offering a small roadmap so participants of the MOOC might know how to continue their projects after completing the course. The event featured a total of 123 live views. As for delayed reproductions, they have already exceeded 400 views.

The videos of the course accumulate a total number of views of 2906.

In addition to all the aforementioned broadcasting channels, the MOOC created a list in List.ly, which has been used for content curation both by the interaction and facilitation team and by the participants of the course. The data this tool offers are as follows: 173 shares and almost 3,300 views.

Participants have also collected their thoughts on how to change education in a Padlet created during the MOOC. You can also listen to the reproduction list on Spotify created by participants in the MOOC.

Some of the projects created by participants are:

In order to improve the experience of future editions of the MOOC and to collect impressions and concerns of the participants, they responded to a survey at the beginning and at the end of the course.

When asked about the number of MOOCs done before, of the 232 participants who responded to the initial survey, more than half (121) said it was the first experience in this form of learning. The rest had certainly made that training before. In fact, almost a quarter of all these respondents had already completed more than five MOOCs. 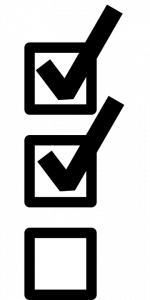 After the course, participants answered a question that was aimed at finding out if the MOOC had met their expectations. The unanimous answer was 5 of 5. 100% of the participants who completed the final MOOC survey noted that among the positive aspects of their own learning experience was the completion of the final tasks. They also highlighted the clarity with which the objectives were raised and the correlation between them and their personal learning goals.

The high degree of satisfaction reached by the participants of this MOOC deserves special attention. Moreover, this has resulted in the absence of negative aspects to report, although some participants (35%) have pointed out they would have needed more time to develop their projects. This data actually indicates the seriousness with which the participants have approached the MOOC, as they have aimed at creating high quality projects, which requires a large investment of time.

As mentioned, all course participants have been fully satisfied with this learning experience. Both the MOOC and those projects created by the participants as well as the interaction among them have received very good ratings, to the point that all respondents would recommend their coworkers the enrolment in this course. Thus, the NPS (Net Promoter Score) index of this MOOC is 100%, that is, all participants promote it. 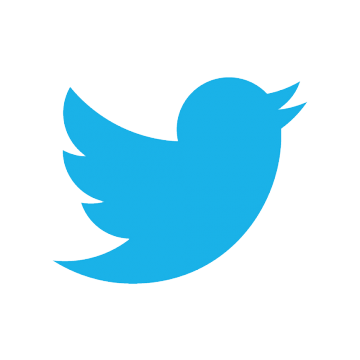